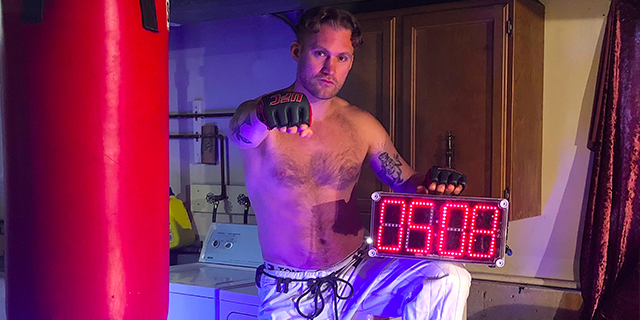 Let us introduce you to Vancouver / Berlin musician © Linda Fox! Earlier this month the talented artist released his third and utterly brilliant album “Dance Like Nobody’s Watching“. The record is a beautiful rollercoaster ride of emotions and sounds. © Linda Fox effortlesly glides through different genres, yet maintaining his own sound thanks to his mesmerizing vocals and lyrics.

After sharing the album’s swooning first single “Teenagers Kissing“, and hypnotic “I Tripped Out Of FLUX” it’s now time for the record’s third single “Step By Step (2 Paradise)“. Which comes with quite the impressive and creative video. We can see © Linda Fox running around the forest in a super cool and 360 degree experience!

We recently talked with © Linda Fox about his music, new record and inspiration behind it. Be sure to read his great and interesting thoughts below. “Dance Like Nobody’s Watching” LP is out now via Street Pulse / Shameless/Limitless! Read the interview below and give the “Step By Step (2 Paradis)” video a watch now!

For everyone that hasn’t heard any © Linda Fox music, how would you describe your sound?

So pretty much you mean for anyone living as a hermit completely off the grid in a remote part of the world or else in solitary confinement in a maximum-security prison? Well for anyone living in those two specific circumstances, the © LF sound is like Lyrical Rascal-Pop mixed with Spa-Therapy Chill-Out Trance, with a touch of Relaxation-Jazz.

On some of the album tracks, a woman vocal appears as well. We’re guessing these are your own vocals pitched up? Or is this actually the ‘real’ Linda Fox coming through? What made you decide on this creative collaborative effort?

Some few years back I done found I’d become a vessel! Possessed as it were. You see, I’d been dang near hollowed out for crying out loud! Filled up with the Thoughts and Dreams of another being – Some kinda mixture of a fictional character from a Philip K Dick novel named Linda Fox, a holographic singer from Earth whose songs were sent via satellite to Mars, and a sleep therapist I went to as a young fella, also named Linda Fox, who cured me of my incessant Sleepwalking when I was just ten years.

These two versions of Linda Fox came together within the walls of my Mind Zone to form one singular entity, and they brought with them melodies and lyrics and hopes for the future. It didn’t take long for me to realize how much money I could make by taking their mystical theories and enchanting rhythms and turning them into pop music. So my first album with this project, Leopards Break into my Heart, was fully sung in the pitched up Linda voice, which was the closest I could get to how I heard it in my head.

Well when the Lindas found out how rich I got off that first album they were steaming mad, and they wanted some credit… So after a long and expensive legal battle it was decided that I would put the copyright symbol (©) in front of any music I made out of this interdimensional cohabitation and they would receive 100% net profit. But here’s the ticker, it’s been so long that I can’t tell which thoughts come from my own dang brain tissue and which ones come from the genius of the two Lindas. And what’s more? Now there are even other cosmic thinkers taking up space in my Mind Zone (I reckon once you let a couple in it ain’t long before they all want in), so most of what I say in those songs is the voice of some genius from another plane of existence trying to make a quick buck. There’s a fella in there named Ruskin who has some really interesting theories about time. Might name the next album © Ruskin.

“Dance Like Nobody’s Watching” is quite an eclectic album. It goes from lush bedroom pop to 90s dance bangers, yet still sounding extremely cohesive. How do these different sounds all come together? Is it something you keep in mind while making an album or is mostly just you having complete creative freedom and fun?

There’s an old saying in The Industry (music industry) that goes “when you’ve got one song, that’s all you’ve got. But when you’ve got two songs, that’s when the enchanting possibilities of a full album start to swirl up and around every part of your being twenty four hours a day, seven days a week – making colours brighter and the air more fragrant.” I might not be quoting it perfectly, but what it means is that once you’ve got two songs you’ve got negative space to fill, you’ve got a dynamic to develop, you’ve got difference to expound upon.

One day I found myself sitting on the edge of my bed (which at that time was just an elevated plank of plywood, because for a couple years of my life I was sleeping without a mattress in order to strengthen my Spine and other major Bone Systems) and so there I was sitting on the edge of my bed and I realized I had two songs! Well that’s when I started to feel the enchanting swirl. But it was a complicated swirl, because one of my two songs called Teenagers Kissing was basically a lyrically-driven Pop Masterpiece, while the other one was an untitled 20 minute Instrumental Ambient Disaster. Other less ambitious musicians might have decided to make these into separate albums, but I take that Industry quote very seriously. So Dance Like Nobody’s Watching was my attempt to create a journey that leaves from pop music, travels courageously across every known genre in music, and ends up in ambient no man’s land. And there was just no better way to cap off that journey than with a quote from Elon Musk promoting the merging of Human and AI brains. Listen close, he makes a good point.

What are some of your inspirations for this new record?

The process of blending all the songs together and creating a kind of seamless movement was influenced by albums like KLF’s Chill Out and The Future Sound of London’s Lifeforms. Lyrically I’ve always been influenced by Stephen Jenkins from Third Eye Blind. I even borrowed one of his rap rock melodies for a track on this album (hope he isn’t reading this interview, I can’t handle any more lawyer fees…) It’s been a while since I mentioned Enigma as an influence but that’s a big one. Principles of Lust is the kind of song that I would make if I was trying to make the perfect song and Enigma hadn’t already made it.

One of our early favourites is “Dream On A Rascal’s Edge”. Definitely a track we love dancing to like nobody’s watching! Which song is your current favorite and why?

Well thanks kindly. That song’s definitely the intellectual property of Linda so legally I can’t accept your compliment, but I’ll be sure to pass it along.

There are these two songs called Exhale Pure Light and Step by Step (2 Paradise) that go back to back on the album as songs 4 and 5, but when I originally made the album they were just one song in my mind. It seemed obvious to me that they were two parts of the same song. But when we sent the full album as one continuous file to some focus groups to test for marketability across different demographics it turned out only new born babies thought those were the same song, while all other demographics believed that they were actually two separate songs. Well, I obviously don’t want people to think I’m a big baby so I made them separate tracks for the album. Also, I just released a new video for Step by Step (2 Paradise) last week, so for marketing purposes I’d say it’s definitely my fav song right now, and the video, which is a 360 degree VR Forest Simulation, is pretty damn good too 😉