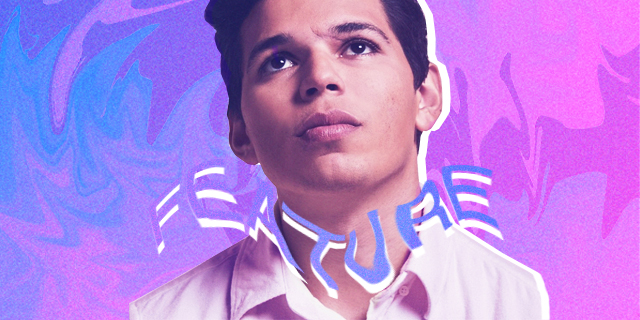 On the 10th of September in 2017, LA-based artist Harmless went through the worst day of his life because of a terrible accident. Nacho got struck by a drunk truck driver and almost lost his life. Now, 2 years later the artist is still recovering but ready to share new music created after the accident. In a personal facebook post Harmless shares that creating the new songs has been a form of therapy to deal with his closeness to death and his still present pains.

Harmless is ready to share his therapy with everyone in the form of a new song called ‘Para Poder Llorar‘. Which means “To Be Able To Cry“. It’s a beautiful moving song, especially when you think about everything Nacho had to go through. It’s lush synths and Harmless infectious vocals in Spanish just makes you dream away.

Being moved by his new song and story, we decided to reach out to him and ask him some questions. Read more and listen to ‘Para Poder Llorar‘ below:

I saw a heartfelt letter you wrote to yvynyl. You mention the struggles of finding your path and how hard it can be to create something and share it with the world. After everything you’ve been through, how does it feel to be releasing new music again? Especially something so personal to you and part of a such a hard time in your life?

Man, I miss yvynyl. I sent him letters almost every chance I got, which usually was around the time that I had something to release. I think at the time I was just out of a break up, an immigrant in a country with a new president and future, feeling really incapacitated and rejected. Those sentiments I think carried the weight of that letter. Releasing music now, especially after death, is different.

Could you tell something more about how therapeutic it has been to create music in your recovery process?

I don’t understand things like I used to, or have goals like I used to, I am just happy to be around to share it. The process of making the music is far more rewarding. Although I barely manage to make stuff due to pain, I muscle through it and find it rewarding. With this music, it was that, it was therapy. I wasn’t thinking about where it was going to end up, or how it could help me reach my goals, I was just making it because it felt better to create something than any of the pain and memories that still follow me after being run over.

You created a wonderful EP together with Drew Straus as Elio. How did this project start and how did this collaboration shape your own music? Was it nice to let go of Harmless and create something as an alter-ego for once?

Man, Drew is an angel. He brought me an OP1 when I was on bed rest and encouraged me to play around with it while I was learning to walk again. The songs on the EP that I made are based off of those days I spent in bed. The project, Elio, had actually started maybe a month before I got run over. I was cycling to his studio to record music. I think we had started with Empty Persuasions, I was dating a girl at the time that made me feel that way. After I got hit, we took a break but once I was a bit more mobile I’d go to his house and write songs. I’d often lay down, or cut sessions short, but Drew was patient. The collaboration was a pleasant distraction for the both of us. We had so much fun making it. It was nice to let go of the therapy I was making at home and of my own Harmless trajectory. Elio reminded me of how spontaneous and entertaining music can be.

What else can we expect from your upcoming EP Condiciones?

Probably one more single and then I am just going to release it in full. It’s very short. Hopefully I’ll be releasing some art that I made throughout the recordings, but that’s still in the works. For now, I am just happy to be alive and sharing wherever it may go.